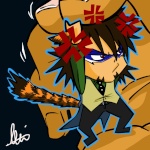 Likes: Gundam, Setsuna, Lockon , Gundam, Setsuna, Sky,
Dislikes: Hate to lose
Personality: He always in love with Gundam and his pilot which is Setsuna. He never gives up and tend to always chase after Setsuna. He's already been called pervert in his young age.
Relationships: Setsuna (lover), Setsunya (neko version), Lockon that acts like older brother (three of them belong to Shirou -oh -sakura

Any Additional Info/Backstory:
Hamu-chan has many name for him. Hamu-tan, Hamu-chi, Ham, Hamtaro etc... Hamu-chan doesn't like to be called weak eventhough he has a cute face. He wanted to be strong and thus learn the bushido's way. He may look shy but actually he's plotting something