Anyways!
Since this is a Chitty Chat thread, let's chat :D

How's everyone doing, in terms of planning/buying/completing your doll list? Got a whole list planned out? Aiming for that one specific doll? Bought that last doll in your wishlist and got your doll family completed?

As for me, I'm currently on a standstill, haha ;w; /broke
More like enjoying the ones I have right now :D
I am saving up for my Volks SD13 Rinon. Hopefully I'm able to get her at the end of the year ^^

Posts : 96
Join date : 2012-07-12
Age : 32
Location : Subang Jaya, Malaysia
Doll plans?
First I had one, then I trashed it orz
I wanted to shell out a lot of my characters into resin form, but recently the next character I'm getting is demanding a lot of my attention and also demands to be a solo resinling (Not happening, Emaen is here for keeps and I'm getting his close friend Hadarunn eventually too), demands a room and demands I get a younger/chibi version of him eventually... Aside from the first demand, I'm mostly yielding, but with this much inspiration for him I've lost inspiration and drive for other characters haha.
I'm sure it'll change after I've had him for a little while (he's still a floating head at this point) and I'll get inspiration back for my other favorite characters and new characters but for now, Kizon is the only plan on my plate!

hehehe well i know that mod do takes a lot of time in this so not really to criticise it ^^;

Doll plans.... nop not really as I may have sudden plan most likely.... that's how i get my second girl XD btw I'm in progress of getting my first doll boy's body now^^ strange enough though, as there's no any doll that I will really like "MUST HAVE" feeling.... and last time I do like a doll from Leeke but since they stop production of dolls.... I guess I'll just forget it.

And I didn't know Leeke stopped production of dolls? O_O Shows how much I'm out of the loop D:

Posts : 96
Join date : 2012-07-12
Age : 32
Location : Subang Jaya, Malaysia
PinkyDolphen-- I'm really sad that Leeke's stopped producing dolls too, there go my plans of owning a Mihael someday orz He's really popular on the secondhand market on DoA so he'll be way too expensive for me to justify getting anymore oops.

Palettescope-- Man, he's a little diva. I suppose it's mainly because he's a solo character, I haven't designed anyone in his 'world' yet so he just wants attention. Almost all my other characters have other characters to interact with so they're quieter about demands in general-- all they want is to be clothed, eyed and wigged and that's enough. Or it could just be because he's like 13 compared to my other characters in their mid-twenties and older. |:
Kizon is a Ninodoll/Kawainino Bada (he wants to be chibified as a IllusionSpirit Anita), Emaen is a Bobobie Weylin and Hadarunn will be a Dollzone Memphis.
Leekeworld stopped doll orders at the end of July ):

Posts : 135
Join date : 2012-03-04
Age : 34
Location : Klang, Selangor.
Syntheticality: I'm so sad when i knew Leekeworld stop dolls production T.T and I can't do anything as I don't have any extra money with me when they announce it >.< I want Jereme so bad!!! (btw Leeke stop the dolls production after end of June right if I don't get wrong?)

Palettescope: My first boy head mold is Luts 2011 winter head^^ now making him into 70cm^^ and just a random talk: I wanna try to face up it but I scared I'll ruin the head >.<

And PinkyDolphen, oohhh you have a Wintery 2011!

I love the Wintery heads ^^ I have the 2009 and 2010 version, haha! And as long as you coat your doll head with MSC and use the right materials, you won't ruin him!

I tried faceup a few times and realized it's definitely not my forte =w=;

Posts : 96
Join date : 2012-07-12
Age : 32
Location : Subang Jaya, Malaysia
PinkyDolphen-- That's right, they did stop it at the end of June! My bad, I'm 21 and I still get June and July mixed up lol.
Also faceups aren't that bad! I personally find them quite fun but that's just me xwx;;; I definitely need practice though haha, I'm thinking of getting a cheap practice head from the DOA marketplace so that I don't have to mess with my boy's faces for practice once I get them perfect. (Me and my n00bness managed to squeeze these out, they're not amazing at any rate but they're alright I guess!
Definitely try it out, if it turns out it's not for you, then oh well, at least you tried! You never know. :3 Especially since you have a while before you get the body!

Palettescope-- It really is, they have some really gorgeous sculpts! Man, their prices are gonna skyrocket, Mihaels are in really big demand atm I think. A friend of mine put hers up for sale and got a lot of interest immediately. orz

Yep forum layout had been changed cause I find the old layout's fonts a wee bit too small lol. Hopefully it's okay with everyone!

PinkyDolphen: yep, I know that the forum banner can be done better, and it's currently in our plans to organize a simple design contest just for that! ^_^ Maybe it can be done in the Games category for the time being?

And palettescope, to answer those questions of yours:

1. How's everyone doing, in terms of planning/buying/completing your doll list?
I just paid for a doll that wasn't on my wishlist, but I fell in love with the sculpt at first sight that I really had to have her >///<

2. Got a whole list planned out?
Heck yeah! Though I'm not sure if I should list them all out cause there's about 13 dolls in total on my list lmao

3. Aiming for that one specific doll?
My grail doll: Volks Suigin Tou ;____;
But aside from that, I'm aiming to bring The Other World - Milaya Windhunter, home one day

4. Bought that last doll in your wishlist and got your doll family completed?
My doll family can never be completed anytime soon ;____; but the last doll that I had gotten that was on my wishlist was Lucifer (SSDF Flood on a Volks SD13 body)

can i suggest something: organize a game like a photo-shoots competition based on a theme (I did joined a group of Midwest USA doll community b4 and it's fun^^ The last time they had a theme of fairy tales and u have to get all of ur dolls for it) cz i do felt that here's a bit lack of pretty doll pictures..... =w= (don't whack me!!)

hope everyone can participate >w<

P/S: It's an awesome way to show off your kids too *ahem*

Speaking of the boys... the resin chips I needed to do a resinmatch came in the mail today, my floating head kid will have his body by the end of next week aww yis

and also waiting for games and contests updates^^ hehehe

Posts : 96
Join date : 2012-07-12
Age : 32
Location : Subang Jaya, Malaysia
I'll probably take him out for photos the moment his body arrives! *v* His eyes arrived yesterday, and his wig has been posted today but he has a hat he can wear if his wig isn't here by then.

I might start a photo games thread, if it's alright with mods? o:

We're finalizing some loose ends for our forum banner games actually, and it's a planned ongoing thing so that we can change the forum banner from time to time as well so stay tuned! ^_^

Posts : 96
Join date : 2012-07-12
Age : 32
Location : Subang Jaya, Malaysia
I finally got paid back some money that I was owed, and I finally put an order in for kizon's body!
... some shirts and bracelets also arrived in the mail for him today and I'm laughing how he already has clothes even though he has a body, but his head is here and his wig hasn't even arrived yet.

Sorry I've been slow to post photo game threads, it's a bit discouraging when I want to take photos for the first post but my kid doesn't even have his body or proper wig yet >_> he's currently stealing my housemate's headless green body...

Speaking of photo games, I should really bring Orpheus out for a photo shoot session when I have time. <3 Poor boy is stuck in his coffin all day and night long LOL. ><
But aside from that, I was thinking of starting a cosplay project for Orpheus. I thought of making a modified Kyubey costume (a Kyubey tuxedo suit? XD) for him, if I'm cosplaying. Plus, I think it's a good thing (for me) to start learning how to sew. oTL

and yay for photo contest~ I'll definitely join it^^

Posts : 50
Join date : 2012-03-03
Age : 29
Location : Neverland
A cosplay photo game thread? Sounds interesting! But I think it'll take some time for everything to come together. oTL And hmm, headgears on dolls. It sounds interesting too but I just realized that I have never bought anything to put on Orpheus's head. LOL. XD Maybe I should make a nekomimi hat! 8DD *coughs*

Admin
Posts : 269
Join date : 2011-11-25
Age : 36
Location : Subang Jaya
PinkyDolphen: Basically just dump some hats/kitty ears/ANYTHING you want on your kid's head that can be a headgear

Here's a couple of examples from Ragnarok Online: 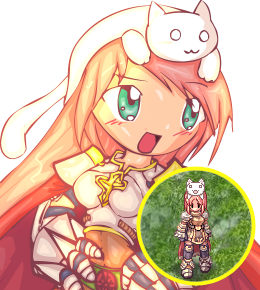 And one from MapleStory: 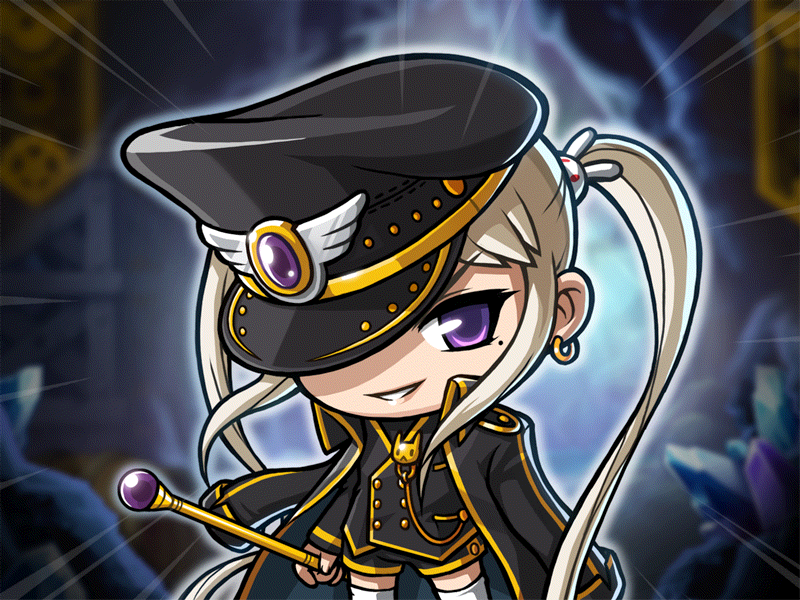