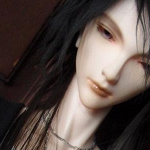 I've been meaning to ask this since forever, but kinda got lazy/forgot and all that... ;; *coughs* Here's my problem.

It seems that my doll is a little special in that he has eye sockets and on his official website, it's stated that he wears Acrylic eyes, 14mm. I missed out on that detail and got him 14mm glass eyes instead and now his eyes doesn't seem to fit into the sockets properly. Like, there's some distance between the the eyeball and the back of the face. It makes it a little hard to see his eyes? The eye socket looks like this:

So my question here would be does this mean that he can only wear acrylic eyes? And, does acrylic eyes have domes?

glass eyes and acrylic eyes are basically just different by the materials used to make it, it doesn't affect the size actually. Just that some of the eyes domes are high, be it glass or acrylics. some of the website they did noted that their eyes dome are high/ low/ none, but if they don't u can always ask them before purchase it^^

If the problem is that socket too small, u can get an eye sizer and some sand paper to sand it off a little, might be fit better then?

And currently there's a Dollmore GO's running by hyschara, u can join us if u want it^^
*hey I'm trying to get someone broke here* << so bad

As for the shop, I actually went through it already. XD; Unfortunately I can't find anything I want. Well okay, I do want the sofa but it's expensive...

Admin
Posts : 269
Join date : 2011-11-25
Age : 36
Location : Subang Jaya
Lucifer has a similar problem too, though it's nothing too serious. I'm not sure if smaller eyes will help cause there might be an empty gap between the eye and the socket.

But what I do know is that you can enlarge the eye socket using the eye beveler. That tool will help you much on this matter

(From memory, I think there was a company that sells in-between sized eyes, too? So theoretically you could get 13mm sized eyes that don't look as small as 12mm would when they're in, but obviously not as big as 14mm would. I'll look it up later and edit some info in if/when I find it.)