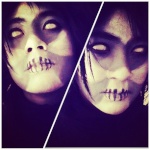 Posts : 96
Join date : 2012-07-12
Age : 29
Location : Subang Jaya, Malaysia
Ordered Through: Directly from visavis.
What did you order: 1x Ninodoll Bada head
When did you order: July 2012
How was the communication: Good. Received an invoice quickly, was notified when payment cleared and a tracking number once the head shipped.
How easy was it to pay: Easy, I was sent an invoice and paid through Paypal.
How long did it take to ship: Less than a month after the preorder period closed-- I received the head exactly a month after the preorder period closed.
Was the quality appropriate for the price, in your opinion: Yes-- Resin is lovely and the outside is well finished. Being an older head-mold however, my Bada came with the old-style head with a resin hook on the inside of the headcap and a neck hole to allow for it. The inside of the head is uneven, but not rough, but since it's the inside it didn't bother me too much. The eyewells are a bit uneven in my opinion though, and I'll probably bevel them out a little to even them out and have eyes sit nicer in it. The head was well packaged when it arrived and a small amount of delicious Korean snacks were included in the package.
Did the item look like the sales pictures: Yes.
Were you satisfied with the product: Yes.